Exhibiting a super talent in singing, Anwesha Anandita of Class IX has enthralled everyone with her melodious voice. As a token of appreciation, the talented girl has been selected for the ‘Guru Ravi Jain Award, 2018’, to be received on the auspicious occasion of Ratha Yatra at New Delhi. She has also been invited to give a solo performance at Haus Khaz during the event. Later in the evening Anwesha will perform in the 2nd Guru Ravi Jain Youth Festival of Classical Dance and Music held at Kala Kunj.

Anwesha is also a Child Artist in All India Radio and is regularly invited to perform in various platforms during important occasions. As a matter of honour and pride, she was invited to perform at Puri on the last day of the Ratha Yatra 2017, during the advent of Lord Jagannath. She has showcased her talent at Rabindra Mandap, Youth India Festival at New Delhi, Bali Yatra Festival and many more.

The humble girl has received various awards and accolades for her mellifluous voice like the Pragati Prativa Award 2016, Guru Ravi Jain Award 2017 and many more. Anandita is also a brilliant Odissi dancer and has showcased her artistic wonders at various eminent platforms. She feels indebted to her Guru and also the Music teachers of SAI International School who encourage her and help to refine her performance through rigorous practice and feedback. 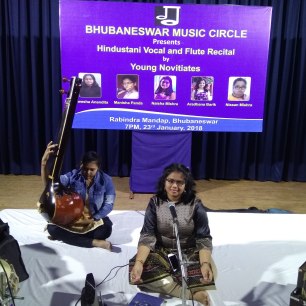