Being a Round Square Candidate School, students of SAI International School took part for the first time in the Round Square International Conference (RSIC) held at Indore from October 2 to 8, 2019. Round Square is a not-for-profit network of 50 countries on six continents that share a passion for experiential learning built around six ideals of learning – Internationalism, Democracy, Environmentalism, Adventure, Leadership and Service.

A six-member team from SAI International School comprising of four students and two teacher co-ordinators attended the prestigious RSIC 2019, held at Emerald Heights International, Indore. It was participated by students from 157 Schools from across the globe.

The RSIC is an amalgamation of different communities and cultures where students had a real global experience, through a wide spectrum of activities. They spent five days networking, building friendships, attending workshop on the Round Square (RS) Ideals and completing various community service project with schools from countries like USA, Switzerland, Canada, Australia and UK to name a few.

This coveted conference is hosted by different Round Square Schools from around the globe every year and this year, it is being hosted by an Indian School. The Conference was scheduled in the week that celebrates Mahatma Gandhi’s 150th birth anniversary and is dedicated to non-violence and peace. The theme of the Conference is ‘Sarvodaya – The World We Wish to See’.

The team got an opportunity to hear some of the universally acclaimed speakers who spoke about a wide array of subjects including democracy, sustainable development, mindfulness and many more.The first Keynote Speaker was Nobel Prize Winner, Shri Kailash Satyarthi who briefed the students about his crusade against Child Labour. He inspired the young minds to follow the 3 Ds – Dream, Discover, and Do. Indian Politician and Writer, Shri Shashi Tharoor highlighted the fact that this generation would have to know the art of learning because of the major transitions that will unfurl as time passes.

Robot Sophia, world’s first Robot citizen and a citizen of Saudi Arabia, addressed the students on the benefits of Artificial Intelligence (AI).Artist and Women Right’s Activist, Ms. Kiran Gandhi delivered an inspiring keynote address on the power of equality. Major D.P.Singh, the first Blade Runner of India inspired the students by telling that, ‘you are the Boss of your life and once you recognise that, then no hurdle or challenge is big enough for you”. Swami Gaur Gopal Das spoke on what happiness was all about.

Each session was followed by a Barazza where students in group took the discussion forward. Barazzas and rikkas were held to bridge individual and cultural differences. Here scintillating deliberations were held to elaborate different perspectives on a topic and students had the freedom to explore their creativity. In one such activity, students had a great time creating their own hashtags and explaining them in from of their respective Barazas. The theme of SAIoneers hashtags was ‘the future we wish to see’. SAIoneers also spoke about the importance of youth in addressing the global challenges.Every evening gala theme dinner depicting the different state of India with cuisine specific to that area and local market were set-up.

The SAI students gave a wonderful Odissi performance during the cultural evening. The energetic crowd enthused the team to teach them the signature Clap of Happiness of SAI and finally tossing the giant globe in the air with Vasudhaiva Kutumbakam – one world one family written over it, symbolising the world as one family. This is also our theme for SAI Model United Nations Conference (SAIMUN) which is held annually in the month of July, since the year 2013.

The team took part in a 3-km Marathon along with Major D.P.Singh, the first Blade Runner of India and students and teachers from all corners of the world. The cause behind the Marathon was to ignite the student’s spirit of adventure and create awareness on Cancer. It was a joint effort by the Indore Cancer Foundation and Emerald Heights International School. For Round Square a spirit of adventure is characterised by those who push themselves beyond their perceived limits, cross boundaries and discover that they are capable of more than they thought.

Students also went to various places to render their service. One of the SAIoneers went to an underprivileged school where she played with the kids and served them food; another student went to a school for dyslexia, where she painted walls and gave out school shoes and uniforms; the other student visited a school for the blind and prepared ladoos and pen stands; the fourth student went to a old age home and took part in gifting the elderly people block printed bed sheets and pillow covers. All the four students spent quality time in their respective groups.

The team went on to explore Mandu, the ancient fort city of Madhya Pradesh on Saturday, October 5. SAIoneers were captivated to see the architectural marvels and learn about the various myths and historical significance of the city. The beautiful pavilion pf the Revakund inspired the students to practice some of their Odissi steps. Their guide was a student of the host school, who made the trip all the more interesting with detailed information. They also visited the commercial capital of Madhya Pradesh, Maheshwar the very next day, where students apart from sightseeing, witnessed the traditional Maheshwar textiles. They were welcomed with thread necklaces by little kids and were filled with valuable information by their guide, a Class XII students of the host school.

Round Square students are encouraged to discover and develop their won capabilities through a range of experiences, activities, collaborative projects and challenges, both within and outside the curriculum, including social service projects, exchanges and conferences participation. SAIoneers and the Teachers had a wonderful learning experience at RSIC. 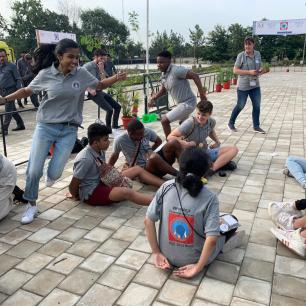 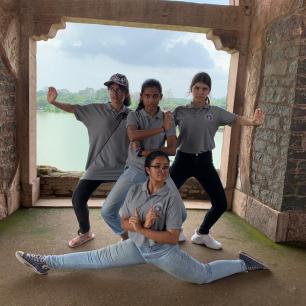 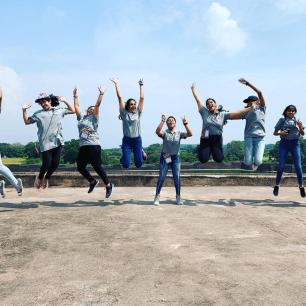 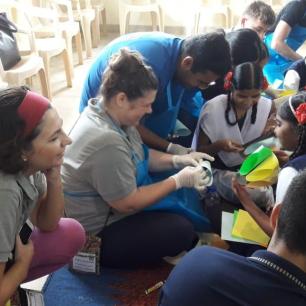 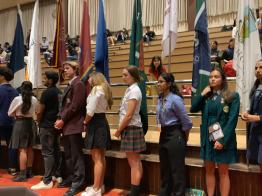 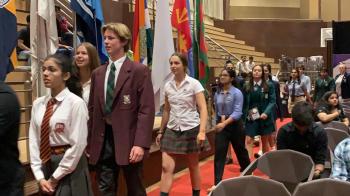