The Class IX and X Club Members of SAI TV made a Presentation during a Special Assembly on Friday, September 20, 2019. The Club President, Divyashis Mohanty conducted a live interview of Class XII student Apekshik Panigrahy, who is an achiever at the International level.

The Members also presented a brief about the activities of SAI TV as well as informed the students about the new Play List in the SAI International You Tube, ‘SAIoneers Creation’, which is created to showcase the talents of SAI students.

SAI TV is one of the most stimulating clubs that enables students to get an exposure on the basics of film making and television production. It focuses on enriching student’s knowledge on the 4 P’s of creating television programmes like Planning, Production, Programming and Publicity. 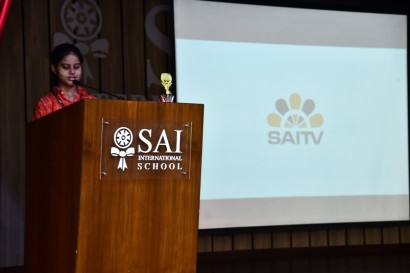