“People throw stones at you and you turned them into milestones.” - Sachin Tendulkar

The 7th edition of SAI Premiere League was a massive success! The grand finale of the league was graced the famous Cricketer & Top-Order Batsman, Ranji Trophy Player, Captain of Syed Mushtaq Ali T-20 Trophy, Shri Anurag Sarang on November 12, 2022 at the Pele Sports Complex, SAI International School. In the final batch of match that commenced for this phenomenal cricket league, Class XI Science Team from SIS stood victorious & aced the finals by being the champions of Senior Group with a scintillating score of 176-4. SAIoneer Yash Pradosh Das was titled ‘Man of the Series’ for this league for his outstanding performance. Team SIRS Class IX-X were declared Runners Up for the Final Match.

SAI International was pleased to welcome Mr. Anurag as the Chief Guest who is a top-notch batsman who made his first-class and List A debuts for Odisha in 2014. He's a left-handed batsman who prefers the limited-over format over the longer version and his stats are more than enough to prove it why is it so. He started his professional career from Kalahandi Cup and OPL 1 organised by OCA. He was selected for Australian tour in 2011 to play against New South Wales and Queensland.

Extra-curricular activities should be a relevant part of every student’s life, especially during his/her early academic years and students should be encouraged to excel in both sports & academics. The conceptualization of the SAI Premier League was one such endeavour, envisioned by Founder-Chairman, SAI International, Late Dr. Bijaya Kumar Sahoo with an objective to inculcate skills such as teamwork, leadership, patience, discipline, learning from failure, competitiveness & sportsmanship as a prominent element of their learning curriculum. At SAI, we aspire to imbibe in our students- the spirit of sportsmanship and that ‘never giving up’ spirit.

It was splendid to witness the drive & passion of the students in the final batch of matches today. The guest of honour, Mr. Anurag Sarang was elated to see all SAIoneers perform to the best of their capacities in the finals. He felicitated the winners in the prize distribution ceremony and further encouraged the students to proactively participate in the upcoming cricket leagues. He shared with the students; his experiences associated with his first-class debut in 2014 against Maharastra. It was enlightening for the students to learn various tips & tricks suggested by him in various competitive capacities. They were enthralled to hear about his conversance with the Vijay Hazare Trophy 2013-14. He further advised the budding cricketers of SAI International to focus on well-rounded skills and strength the core abilities. He indulged in an interactive session with the players to showcase some hands-on batting skills & virtuoso bowling styles.

Addressing the students, Mr. Anurag Sarangi, said, “I wish for all the budding players of SAI International to always dream & dream big! Be determined to stay consistent & patient while working towards your goals, and I assure you that your dreams shall come true. I’m extremely grateful to the school managing committee & the coaches for arranging these intra school leagues so smoothly. Some of the coaches present in SAI have been the best mentors to me in my early cricket career, so I’m happy that the students are learning from the best here. I would like to request each student to pursue at least one sport & continue with it, given its prominent role in all-wound development.”

“I would like to congratulate all those students who stood victorious in this cricket league & also to those who lost, because they showed a great amount of perseverance on field and gave a really tough competition to other teams. All of you are winners in my eyes for participating in this wonderful league at the first place. Of course, a big congratulations to all the faculty members & the entire SAI Sports Fraternity, as without your hard work and support, nothing would have been possible and our students wouldn’t have been able to excel in their respective area of sports.

Our Founder-Chairman, Late Dr. Bijaya Kumar Sahoo was an ardent lover of Sports & I’m elated to see his vision of making a Better India through Education being attained with the holistic development of the body, mind and spirit through the amalgamation of sports and education” said, Shri Nilakantha Panigrahi, Director Academics & Senior Principal, SAI International School while addressing the audience. 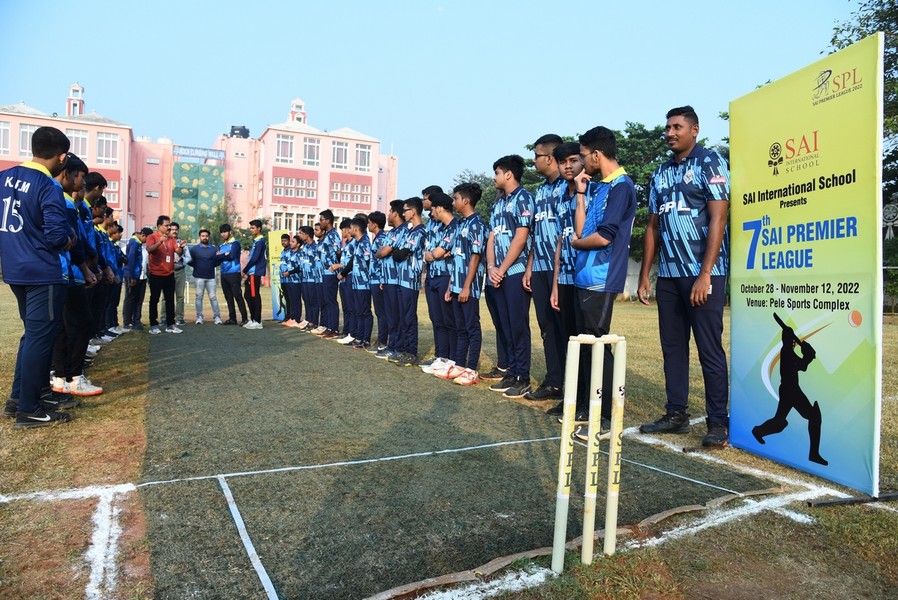