The Indian Armed Forces are the Military forces of the Country which consists of three professional uniformed services, the Army, the Navy, and the Air Force. It is supported by the Indian Coast Guard and paramilitary organisations as well as various inter-service commands and institutions such as the Strategic Forces Command, the Andaman and Nicobar Command and the Integrated Defence Staff. The Supreme Command of the Indian Armed Forces vests in the President.

As a mark of respect and to celebrate the Surgical Strike Day, students of SAI International School gifted the brave Jawans and Officers of the 120 Infantry Battalion, Bihar Regiment at Bhubaneswar letters and handmade cards on October 24, 2018.

The beautiful and creative cards contained heartfelt messages from students who sincerely wanted to thank the Defence Personnel for being their perpetual protector. Through these token of love and appreciation, the young students pledged their support to the Indian Armed Forces.

Students felt highly privileged to do the honours as it gave them a great occasion to meet the Indian Army personally and thank them whole heartedly. They also got an excellent opportunity to watch the display of weapons and military equipment like Rifles, Pistols, Machine Guns, Grenade etc. Students got to interact with various levels of Officials to gain an in-depth idea on the functioning of the Army, learn about the life of a Defence Personnel and being motivated to choose Defence as a career.

Appreciating the students for their effort, Commanding Officer Col. Debadutta Swain said that “Very good pieces of creativity. It gives a great sense of accomplishment to find children acknowledging the contribution of Armed Forces.” Col Rajeev Kumar, Director, NCC Directorate Odisha, briefed the students about the life in the Army and said that is one of the most prestigious jobs in the country. Maj Gen Bhabani Shankar Das added that Being in Defence service is very respectable and it is one of the finest Organisation in the World”.

Shri Thongkholet Mate, RO, Bhubaneswar Region who coordinated the entire event spoke on the invaluable contribution of Armed Forces and thanked the Battalion for their hard work. Shri Nilakantha Panigrahi, Sr. Vice Principal SAI International School lauding the role of the Defence Personnel, shared that “Today we are enjoying a safe life because we know somewhere we are being protected by the Armed Forces”.

The Indian Armed Forces – these very words emanate a sense of respect and gratitude for their unending sacrifices to protect us, be it be in the icy terrain of Himalaya or the scorching heat of desert, they guard us as their family all day and night without complaining.

Our Flag does not fly because the wind moves it; It flies with the last breath of each soldier who died protecting it. A Grand Salute to the Indian Armed Forces. 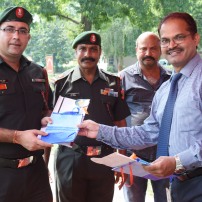 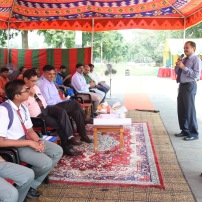