Salute the Martyrs, honour the brave, express solidarity and support towards welfare of widows, children, disabled blind and sick ex-servicemen.

The Indian Armed Forces Flag Day is observed throughout the country since the year 1949 to honour the martyrs as well as the men & women in uniform who fight valiantly to safeguard the country’s pride & honour. The prestigious yearly festival is celebrated for the prosperity of the National life, helping the workforce of Armed Forces and their families and additionally rendering support for the welfare of battle victims, ex-servicemen staff and their families.

To commemorate the Armed Forces Flag Day, a Special Assembly was conducted at SAI International School on Friday, December 7, 2018. Students staged a skit to pay tribute to the brave hearts by showcasing their indomitable spirit and valour as well as their ceaseless love for their Motherland. They extolled the supreme sacrifices & heroic deeds of the soldiers to spread awareness about Armed Forces Flag Day fund and to encourage people to contribute generously for the welfare of the ex-service men.

The student artists brilliantly depicted the miseries and struggles of the gallant heroes as they sacrificed their comfort, their families and all the small and big pleasures of life to uphold the dignity, integrity & honour of the country. They beautifully portrayed the passion and zest of the brave hearts to instil a patriotic sentiment, passion & commitment towards the Nation. Through the skit the SAIoneers highlighted the significance of the occasion and remind the nation of its obligation to take care of the veterans, serving personnel, disabled soldiers and their dependants.

The event concluded with the speech by Class VII student Ananya Sarangi expressing admiration and appreciation for the military personnel’s intrepid & inspiring acts as well as acknowledging the humongous services rendered by them.

The Day reinforces the love and trust for the Defence personnel who had relinquished their valuable lives for the better tomorrow of the nation. It also strengthens the bond among the general population of India and the staffs of the military. 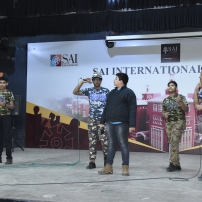 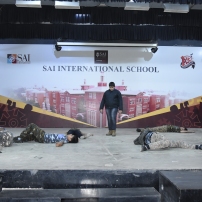 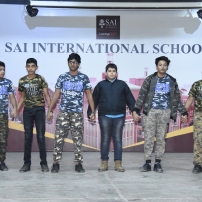