A happy life is one spent in learning, earning, and yearning.

Germany is one of India’s most significant European Union trading partners. The bilateral relations between the two nations are based on the common principles of democracy as well as common views on international trade. India and Germany share strong business and economic ties, which date back to the early 16th century.

German is one of the ten spoken languages in the world. Almost 185 million people across the globe speak German. It’s a very easy language to be understood and written. Making a flourishing career is one of the most important motivators for foreign language learning.

A German Language Interactive session for the students was held at SAI International School with Ms. Anita Mitra, Educational Cooperation Officers Goethe-Institutions/Max Mueller Bhavan, German Consulate on Thursday, January 24, 2019. Ms. Mitra discussed the introduction of German into the school and school’s linkage between SAI International School and Schools in Germany. It was an interactive meeting as well as a session for the students of class V in the Work Shop Room of the School.

The Session comprised majorly on two concepts first being the basic of learning the language which included phrases like “Mien name ist“ (My name is), “Wie ist dien name?” (What is your name?). Students learned how to introduce themselves in German, how to count from 1 to 10 and the names of 5 animals.

And the second incorporated a presentation on the benefits of learning German and its utility in the future. It was a great learning experience for the students. 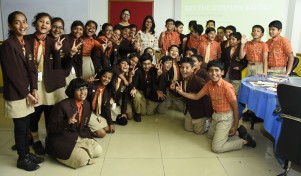