“The ultimate victory in competition is derived from the inner satisfaction of knowing that you have done your best and that you have gotten the most out of what you had to give.” – Howard Cosell

Competitions give a platform to the students to showcase their skills. It helps them to assess their own position in comparison to others by evaluating their outcome. This motivates students to work on their lacunas and strive towards excellence. Competitions encourage people to develop their ideas and skills and adopt innovative methods to enhance themselves. Competitions are the critical drivers of performance.

To enhance the learning horizons of students in Science and Technology, several competitions were held during SAITED 2018.

The JAM session of SAITED saw some interesting topics like ‘You can communicate without speaking’, ‘You somehow get the ability to teleport’, ‘You become as rich as Jeff Bezos’, ‘You sail into the Bermuda Triangle’, ‘You had a chance to witness the Aurora Borealis’ etc.

Sixty seconds of non-stop taking on an extempore topic need real control of mind over the tongue. With co-participants to find fault relating to use of fillers, stammering, repeat words and grammatical error, it’s a real pressure on the participants. But all the more it is fun to be part of it.

In the exciting activity the participants not only, impersonated famous personalities from the field of Science and Technology but also objects, nature and many others. One of the students said that he would make education free till 18 years of age if he becomes the Prime Minister of India, another student gave a long list of things he would do like opening orphanages, hospitals etc., if he becomes a billionaire, another student posing as rain said that he would fall moderately so that he doesn’t harm the forest or any one. However, the competition reflected the philanthropic thought process of the young generation.

The fun-filled event filled the air with hearty resounding laughter. It was held in pair where one member is blind folded and the other was there to guide the companion through a string of instructions. The blind folded participant had to cross various obstacles like cones on the way, crawl through the nets, jump the tyres, collect the littered canes and finally pick a stick and with its help push a water bottle in a pool of water. It was hilarious both for the participants and the onlookers.

Parodies on Science and technology on the tune of hit songs and raps reverberated in the air as students participated in the Science Acapella. It was fun watching the young participants singing and rapping with some technical words that would have otherwise sounded monotonous.

Participants of TED Q, the Science based quiz competition had to wrack their brains to get the right answers. The contest held in two rounds for students from Class IX to XII was both interesting and tricky. After a grueling preliminary round, three teams from SAI International School, two teams from Mother’s Public School and one team from Unit VIII DAV School made it to the final round. Quiz Master Shri Bhibas Rath conducted the event.

The competition was between 85 students of Class IV and V. The topics were given on the spot and students had to make a Power Pont presentation of minimum five slides. The given topics were in relation to the TED theme “Into the Unknown” and the students were given access to internet to help them in their task.

Speak out your Mind

This event for Classes VII and X was a huge hit amongst the students. Around sixty students from various schools were given topics three days prior to the event to prepare a speech of 2.5 min duration. The students had the option to use Power Point Presentation to assist them and also could participate in groups of two.

A new event introduced this year. Students presented narration and skits on laws and definition of Science, making it funny and informative. This gave the students a platform to enhance their knowledge on knowledge of past. 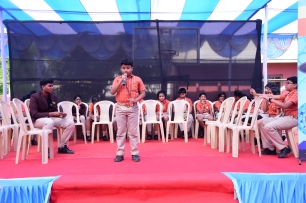