“Classical music is the best and most powerful musical tool that captures and drives the soul, heart, mind and body.”- Anonymous

Sarangi exponent and Bollywood Music Composer Ustad Sabir Khan created an enchanting ambience in the auditorium of SAI International School on Friday, October 26, 2018 playing wonders with his customised musical instrument. He was accompanied by Shri Aadil Khan on Tabla.

Ustad Khan played some of his popular pieces from Bollywood films like Sanwariya, Dangal, Jodha Akbar as well as the recent release, Mumbai City and briefed the students on how several Bollywood films songs are composed from a single Raga. The great musician also shared the history and origin of Sarangi and its genesis from a 3-stringed instrument to a 41-stringed master piece.

Speaking to the students, Ustad Khan said that his mission in life is to take Indian Classical Music to greater heights of success and through music share with the world, the real worth of the country which is full of rich culture, traditions and values. He also inspired the students to have a mission in life and accomplish it through perseverance and hard work. He ended the hour-long performance with his all-time favourite “Raghupati Raghav Rajaram”, playing the Sarangi and singing along with the students.

Shri Harish Sandija, Principal SAI International School spoke about the importance of Indian classical music in the life of a student and said that it is only music which can connect one to the soul.

Ustad Khan who began studying music when he was six years old, is the son of legendary Sarangi player and vocalist Padma Bhushan Ustad Sultan Khan and is the 9th generation of the Sikar Gharana of music. He was trained by his father and Uncle, Ustad Nasir Khan. The young musician has proved his worth as a real successor of a proud lineage with his technique displaying tonal, melodic and rhythmic prowess which is a rare combination of sur and laya (note and rhythm). He has been honoured with several accolades like Ustad Bismillah Khan Yuva Puraskar and Sangeet Natak Akademi Yuva Puraskar.

The event was introduced by The Society for the Promotion of Indian Classical Music and Culture Amongst Youth (SPIC MACAY), a voluntary youth movement which promotes intangible aspects of Indian cultural heritage by promoting Indian classical music, classical dance, folk music, yoga, meditation, crafts and other aspects of Indian culture; it is a movement with chapters in over 300 towns all over the world. 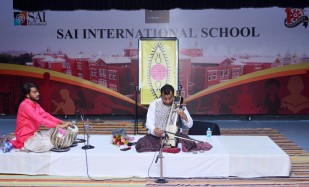 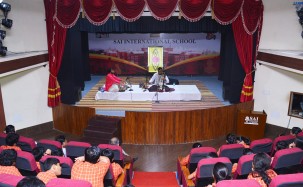